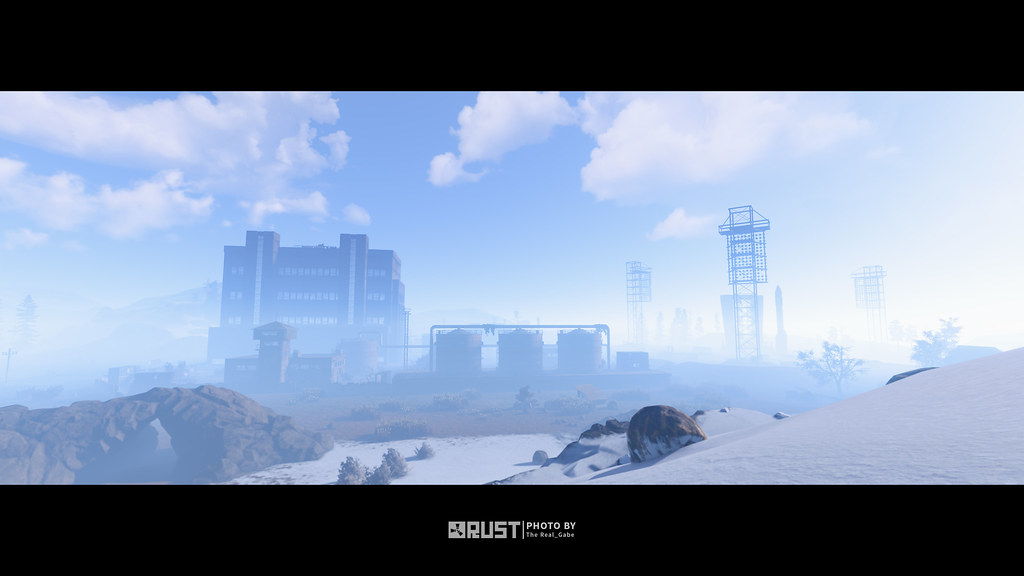 Rust is one of those games in which the gameplay revolves around survival in very hostile conditions. It’s not just about you having to collect resources or dealing with threats from nature. No, in this case, other players will be the biggest of your problems and the most common cause of your (shamefully frequent) deaths. Prepare yourself for a desperate and interesting experience.

The first thing to do to start playing is to choose the server on which we are going to play. If you are asking how you can use the console commands to connect to one, you are playing the pirate version of the game. So, get a life.

Those who have bought the game will have their own menu to choose a server. Ideally, in case you are just starting out, you should look for servers with few people. You don’t want to find yourself in the middle of a group of people who are going to destroy you.

There are several types of servers available:

Every human is an enemy: you must assume that the rest of the players will attack you, because they will assume the same thing. Run away or fight depending on the possibilities you see you have.

It begins gathering resources: it looks for a tree, the one that is, and it strikes it with your stone to obtain wood.
It makes tools: when you gather enough wood, it opens the menu of crafteo and it creates an axe and a pickaxe. It will be easier to collect materials and defend yourself with this than simply with a stone.

Building houses hides lots of secrets and tricks. Once you’ve got the building mechanics right, you can create trap houses. The imaingiation you have when placing objects that can harm enemies, explosives, or cactus that stick out slightly from the ground can be the most gossipy player’s downfall. This is something that is completely up to your personal experience.

Nights in Rust are short, but full of activity. The light of any house, of a fire, of a shelter, will be seen from afar. Players will be drawn like moths to these spots, which can be a perfect place to get resources. If there is a knock at the door and you don’t know the player, ignore it. Most likely, that other person will hack your soul out of your cornea as soon as you turn around.

Just stay home quietly at night if you hear noises outside. Strange as it may seem, according to the comments of the community, houses that seem inhabited but whose inhabitant is disconnected during the night are usually respected. Be careful, this does not always happen, so do not trust anything or anyone. If you have the opportunity, finish with that guy who was knocking at your door.

You have probably already explored a little bit to find animals to get fat for the oven. However, let’s go a little further.

You are never safe, even when you are offline: just because you leave the game doesn’t mean you are safe. When you go offline, your character is still there. Anyone who passes by where you left off can kill you (he will kill you, yes or yes. You are too easy a target to let him run). Therefore, try to leave your character hidden when you are going to stop playing.

There are several areas where there is a lot of radiation. In these places there are quite interesting resources and rewards, but they are most dangerous. Here are a few details to keep in mind: 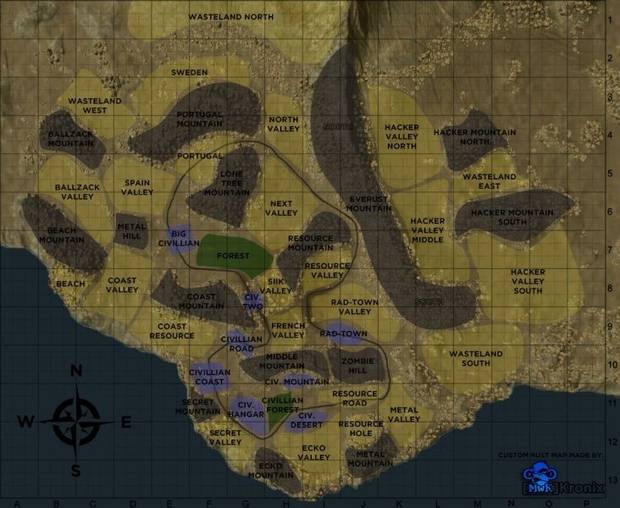 Rust offers a fairly varied map, but fortunately it is not changing and always offers the same areas. In this map elaborated by [MWK]Kronix you can see all the delimited zones clearly. In order to understand the map, there are a couple of things that need to be pointed out:

The blue zones are areas where you can usually find maps of mapping.

In the game itself there is no map, you will have to use the sun as a reference of the direction you are going until you get the usual routes. Remember that the sun rises in the east and sets in the west.

Coast Resource, Resource Valley, Next Valley, Wasteland south and Rad Town Valley are good areas to build your shelter. There are plenty of mineral, wood and animal resources here.

Keep in mind that these areas we have indicated are usually populated.

Just as your shelter or home can be robbed, you can break into a house and steal what’s inside.

To break into a house you have to find a way in, by breaking down the door or a wall. Obviously, breaking down a door is relatively easy, but even so, for example, hitting a rock takes about three minutes. If, for whatever reason, the homeowner had placed multiple layers of doors, you would have to go through them all until you reached the sanctum sanctorum where the shelter owner keeps his things.

Obviously, you have no way of knowing what’s in a house until you’re inside. This implies that you can fall into a trap, which in many cases are quite imaginative and you will not see them until you fall into them.

Keep in mind that you may be able to see lights through the windows if it is night. If you see a light go out and you don’t hear any noise, you don’t know if there will be someone inside or not, but if you see a light go out or a shadow move, then there is someone there and they will probably realize that you are trying to break into their house. You can aggressively assault a house using explosives, both in the walls and on the roof if you build a platform to reach it from above. Furthermore, if you really want to enter that house, you can use two explosives at the same time, in two different points. This will make the owner of the house not know where you enter and it will be possible to catch him off guard.

Rust has been around ever since it became compatible and is constantly changing and expanding. Therefore, it is difficult to decide on one or the other weapon. However, there are some that are quite superior to the others, but they are usually quite complicated to achieve. Let’s start by pointing out what is the “basic evolution” of weapons:

Firearms and explosives, for which you will have to look for crashed helicopters, airplane resources or planes.

Better weapons and how to get them
Flamethrower

It’s one of the really powerful weapons that are easy to get at first. It uses low grade fuel, but consumes it quickly. If you have one on you and want to assault a house with wooden walls, it’s your best option.

A gun with a very high shooting cadence and incredible firepower. It is the ultimate gun and the funny thing is that, although you can’t crack it, it is easy to find it in a helicopter accident. It uses normal pistol bullets and carries up to 15 bullets in each magazine.

A fairly popular sub-machine gun, easy to recognize and with an automatic trigger function. Remember not to shoot in long bursts to avoid each bullet ending up in a point on the map. The submachine gun is quite accurate as long as you don’t leave the trigger pressed and is quite powerful. Use pistol ammunition, the magazine has 30 bullets.

The interesting thing about this gun is that it can be crimped with high quality metal x40, SMG body x1, metal spring x2.

Even though it has been renamed since it first reached the players, it is still an AK-47. This says a lot about this thing: it is the best assault rifle, the best automatic weapon for sure. It is powerful, loads 30 bullets, is relatively easy to crack, has a lot of accuracy… as in any game, the AK is a weapon you do not want to face.

A fearsome fire-breathing dragon with a devastating power. A light machine gun that can’t be cracked (you’ll have to get it from some helicopter crash) and that, although not very accurate, is terrifying as an enemy. With a fully automatic fire, a 100 bullet magazine of 5.56, zoom, possibility to repair it completely and high precision shooting in semi-automatic mode, it is terror in the hands of anyone.